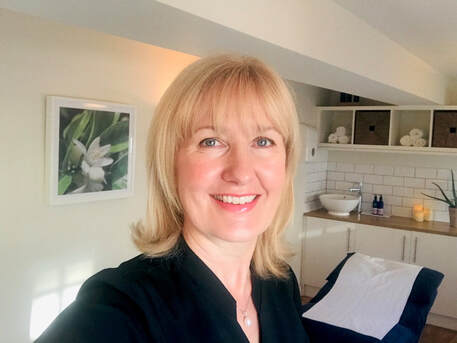 My interest in acupuncture began following my daughter’s successful treatment for hay fever and asthma with acupuncture when she was young. In spite of trying medication, during the hayfever season, she was unable to spend more than half-an-hour outside before her eyes would become swollen and she started wheezing. Following a recommendation from a friend, I decided acupuncture was worth a try.  I was initially sceptical about how acupuncture could help, however, following a course of treatment, my daughter’s condition had improved considerably.

I then used acupuncture to help with feelings of stress during a particularly difficult period in my life.  After each treatment I felt more supported, relaxed and able to cope.

I maintain current and up-to-date practice skills by attending further workshops and courses. My post-graduate studies have included acupuncture for:
Reflexology & Massage

I am also a fully qualified and insured reflexologist and holistic massage therapist.

I was attracted to these therapies as they are both positive antidotes to stress.  Long-term stress can often be an underlying factor in conditions such as IBS, insomnia, headaches etc.  Reflexology and massage are wonderful therapies to help slow down the mind and ease tensions in the body.

I trained at the Academy of Reflexology and Massage in Northampton.